Unlike most Angry Birds games this has what seems to be a resemblance to a plot. The story begins as the birds are watching over their eggs a black hole appears. The birds decide to investigate as a mysterious bird was flown through the black hole. At the crash site they see the Ice Bird who suddenly jumps out of the ole to protect an "eggsteroid". Suddenly a massive claw come out of the hole and picks up the "eggsteroid" and the Ice Bird goes after it. After finding out the Angry Birds eggs were also taken they go after the claw resulting in a intergalatic chase.

The game play is relativly similar to the main Angry Birds but a new element is introduced: gravity. While gravity has already been a part of the franchise it plays a new role here as birds and other objects are drawn to a planet mid-flight. Another new gameplay mechanic is deep space, pigs in space wear helmets to protect freezing if frozen long enough the pig will eventually pop.

Red Bird: The red bird is the normal bird but with a "sling scope" which shows him the best attack.

Blue Bird: The blue bird is same as the original game and splits into three birds.

Bomb: Bomb is similar to the black bird in the original game and explodes after a tap.

Terence: Is a green version of the big brother bird.

Lazer Bird: Lazer Bird is similar to the yellow bird, after launch a tap causes it to rush in the tap direction

Ice Bird: Ice Birds has the ability to freeze on contact and causes an ice explosion when tapped.

Space Eagle: Play the same role as the other games: a easy way to beat a level.

A short based on the game called "Angry Birds: Space Origins" was aired on March 21, 2012 on Nickelodeon. It explains the basic plot of the game. 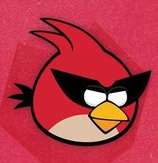 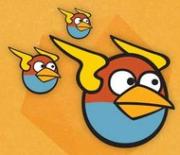 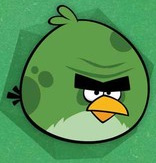 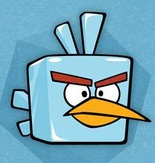 Add a photo to this gallery

Retrieved from "https://thefirstunofficialeditpage.fandom.com/wiki/Angry_Birds_Space?oldid=4091"
Community content is available under CC-BY-SA unless otherwise noted.